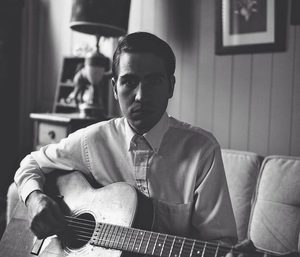 Avi was recently awarded an Ashir Music Fellowship which led to recording with Simone Felice (producer of the Billboard #1 Lumineers album) & members of the Felice Brothers. The result was the Surrender EP , release date TBA

Born & raised in New England, Avi ran away from home in his teen years and ended up in Boston. Spending the next several years in & out of hospitals with a genetic disease, Avi was mostly confined to his bedroom where he spent his time & energy creating songs. After recuperating Avi came out of the room and into the world with the ability to express his true and deepest feelings through song, in a way most men are discouraged to do from birth. Moving to South Carolina, Avi started making a name for himself playing music festivals, being featured in dozens of music blogs & samplers. Over the last two years, Avi has been balancing touring the country playing cafés, clubs & theatres with farming, truck driving, & doing demolition.

No matter how many thousands of musical acts there are, when you hear something that has that special quality it resonates immediately. Check Avi out and see if you hear it.