Author Thomas A. Schwartz with Henry Kissinger and American Power 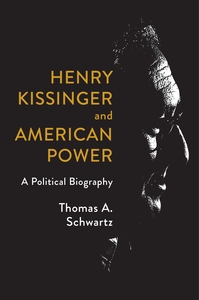 Boston Public Library and the GBH Forum Network present this virtual program in The Arc of History: Contested Perspectives (https://forum-network.org/series/history-talks-boston-public-library/) series featuring BPL President David Leonard, who will moderate this program. People who are interested in attending are kindly asked to register at this link made by the GBH Forum Network: https://wgbh.zoom.us/webinar/register/WN_hBXCJodRRASnd4DxHOJ_YA.

Over the past six decades, Henry Kissinger has been America’s most consistently praised—and reviled—public figure. He was hailed as a “miracle worker” for his peacemaking in the Middle East, pursuit of détente with the Soviet Union, negotiation of an end to the Vietnam War, and secret plan to open the United States to China. He was assailed from the left and from the right for his indifference to human rights, complicity in the pointless sacrifice of American and Vietnamese lives, and reliance on deception and intrigue. Was he a brilliant master strategist—“the 20th century’s greatest 19th century statesman”—or a cold-blooded monster who eroded America’s moral standing for the sake of self-promotion?

In this masterfully researched biography, the renowned diplomatic historian Thomas Schwartz offers an authoritative, and fair-minded, answer to this question. While other biographers have engaged in hagiography or demonology, Schwartz takes a measured view of his subject. He recognizes Kissinger’s successes and acknowledges that Kissinger thought seriously and with great insight about the foreign policy issues of his time, while also recognizing his failures, his penchant for backbiting, and his reliance on ingratiating and fawning praise of the president as a source of power. Throughout, Schwartz stresses Kissinger’s artful invention of himself as a celebrity diplomat and his domination of the medium of television news. He also notes Kissinger’s sensitivity to domestic and partisan politics, complicating—and undermining—the image of the far-seeing statesman who stands above the squabbles of popular strife.

Rounded and textured, and rich with new insights into key dilemmas of American power, Henry Kissinger and American Power stands as an essential guide to a man whose legacy is as complex as the last sixty years of US history itself. To purchase a copy of this book, please visit our community program partners Trident Booksellers & Cafe by using this (https://www.tridentbookscafe.com/book/9780809095377) and the and the free shipping (media mail only) coupon code BPLSHIP, which can be applied under the "Coupon discount" field on the order form used during checkout.

Thomas A. Schwartz is Distinguished Professor of History at Vanderbilt University, where he specializes in the foreign relations of the United States. He has served on the U.S. State Department's Historical Advisory Committee and as president of the Society of Historians of American Foreign Relations. Henry Kissinger and American Power is his third book.

Part of the Boston Public Library’s mission is to support lifelong learning, education and civic engagement that is “Free to All” including programs that bring figures and experts of note into conversation and dialogue. Arc of History: Contested Perspectives is a mini-series informed by historical moments and movements, recent and long past.