Author Sue Mellen with A History of Theater on Cape Cod 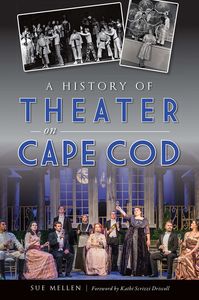 Join author and theater reviewer Sue Mellen for a special virtual program as she lifts the curtain on the rich history of theater on Cape Cod, beginning—where it all began—in Provincetown. She paints a vivid picture of the early years of American drama on the culture-rich peninsula, bringing attendees into the world of Eugene O’Neill and the Provincetown Players, the Barnstormers and other early groups. Then, as she does in her book, A History of Theater on Cape Cod, she takes audiences on a tour of the Cape’s many-faceted theater history, giving theater-lovers an insider’s view of what has made Cape theater great.

A History of Theater on Cape Cod: You might think that American drama was born in one of the theaters on Broadway. But, in fact, truly American theater was born on Cape Cod in 1916, when a group of artists and writers in Provincetown mounted a production of a one-act play, Bound East for Cardiff, by a little-known playwright, Eugene O’Neill. They staged the play in a rickety old theater on a wharf in what was then little more than a sleepy fishing village. From that artists’ colony—and others like it across the Cape and Islands—Cape theater culture grew into the constantly expanding theater universe it is today. The theatrical descendants of O’Neill and the Provincetown Players continue to present classical drama, contemporary hits and new, experimental works to audiences that have come to expect the best. In her tour of the theaters from Provincetown to Falmouth, author and entertainment columnist Sue Mellen reveals the rich past behind a unique cultural treasure.

Call the Library at 508-487-7094 or email btaylor@clamsnet.org for more information on how to join.

Sue Mellen began her writing career as an arts, entertainment and features writer for the Cape Cod Times. She next went on to work in public relations, first for a regional healthcare system, then for a classic car museum. Then, after a short stint as a freelance business and technology writer, she began a content-creation firm YourWriters, which she still operates to this day. Through her company, she has co-written and ghostwritten numerous books for a wide range of clients.

After an extended hiatus, the author has returned to her first love: reviewing the theatrical productions that grace the historic theaters of Cape Cod. Exploring the histories of the theater groups that dot the Cape has been pure joy.

Reddit
29/10/2020 14:00:00 29/10/2020 15:00:00 America/New_York Author Sue Mellen with A History of Theater on Cape Cod Join author and theater reviewer Sue Mellen for a special virtual program as she lifts the curtain on the rich history of theater on Cape Cod, beginning—where it all began—in Provincetown. She pain... Boston Public Library, Boston, MA 02116 false DD/MM/YYYY