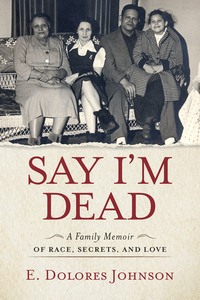 To purchase a copy of Say I’m Dead, A Family Memoir of Race, Secrets and Love, please visit Trident Booksellers & Cafe by using https://www.tridentbookscafe.com/book/9781641602747 and the free shipping (media mail only) coupon code BPLSHIP, which can be applied under the "Coupon discount" field on the order form used during checkout. Buyers who would like the author to personalize their copies may note what they’d like E. Dolores Johnson to write in the "Order comments" field at the bottom of the order form.

"Scared by a local lynching and mandatory prison time for violating Indiana’s anti-miscegenation laws in 1943, my black father and white mother fled Indianapolis and secretly married in Buffalo, then hid from authorities and her family for thirty-six years. She simply vanished, evading FBI and police searches that ended by declaring her the victim of foul play, either dead or kidnapped by white slavers. If Richard and Mildred Loving’s 1967 win at the Supreme Court made them the parents of mixed-race families, then my mother and father were the grandparents, because they chose love over the law twenty-five years before the Lovings.

When I was born, social norms and my government-issued birth certificate said I was Negro, meaning my mother’s white blood counted for nothing in my identity. Born in 1948, I endured many racist roadblocks and aggressions in my formative years. But as an adult, when a cross was burned on my lawn, I bought a gun, and learned how to shoot it. It was not until I searched my father’s genealogy that I found out my grandmother was the product of a plantation rape. And not until those black generations were laid out on a family tree did I realize that my mother was my entire white family all by herself, with no branches on her tree. But of course she had to come from someone, somewhere.

With my identity profoundly shaken, I set out on a mission to find out who all of my family is."

E. Dolores Johnson grew up in Buffalo, NY, the daughter of a white mother and an African-American father. After earning degrees from Howard University and Harvard Business School and starting a career in business, she began a search to understand her family’s history – and found the white half of the story missing. Say I’m Dead unwinds her family’s secrets, and shows the secrets, separation, and transformation they experienced living as mixed race in America. Johnson identifies her family history in the larger American racial story, bringing readers to the present day. Now her African American daughter can do what her white grandmother couldn’t: marry across the color line without fear. Don’t miss hearing about this remarkable book and family history. In addition to this first book, E. Dolores Johnson has published essays on mixed race, racism and identity. Her work has appeared in, among other publications, Narratively, Buffalo News and Hippocampus.