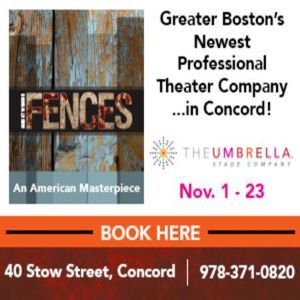 Winner of both the Pulitzer and the Tony Award, August Wilson's FENCES is a true American masterpiece.

Deeply affecting and a profound theatrical experience, FENCES focuses on Troy Maxon, a former star of the Negro baseball leagues who now works as a garbage man. Excluded as a black man from the major leagues, his bitterness takes its toll on his relationships with his wife and his son, who now wants his own chance to play ball.

With one of the greatest roles ever written for the stage, and the unmistakable voice of "one of the greatest dramatists the country has ever produced" (Washington Post), FENCES is a perfect way to introduce audiences to The Umbrella Stage Company's newly constructed Black Box theater at 40 Stow Street, Concord. Directed by multiple award-winning director, Michelle Aguillon.

ABOUT THE SEASON
The Umbrella's Stage Company's expanded, six-show season ranges from high-kicking spectacle to punk rock musical to socially urgent drama. With shows alternating between a 350-seat mainstage and flexible 100-seat blackbox, it will be the first season staged in The Umbrella Art Center's brand-new, state-of-the-art, multi-theater performing arts facilities at 40 Stow Street, in the heart of the historic Concord Center Cultural District. Season, Flex Pass, Group and Individual tickets are available, and patrons can make a night of it thanks to Dinner-and-a-Show deals offered by several Umbrella Hospitality Partners. Free parking, close to Route 2 Walden exit, just blocks away from Fitchburg Rail. See TheUmbrellaStage.org