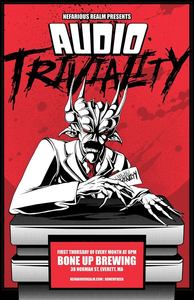 Join us at Bone Up Brewing in Everett, MA on the first Thursday of every month for a night of beer and music-themed trivia with a specially curated playlist of tunes.

What is Meatloaf’s real name?

Do you know the title of the sole studio album by Minor Threat?

What year was …In Justice for All released?

Where: Bone Up Brewing – 38 Norman Street, Everett, MA
When: First Thursday of every month, 8pm.

Visit NefariousRealm.com/audiotriviality to listen to prior playlists!