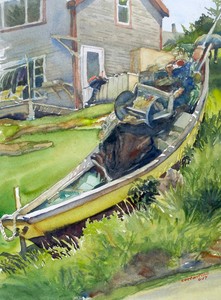 We will offer 3 painting demonstrations in the month of August. TWO ARE STILL COMING UP...

The current exhibit titled Monhegan Mystique is on display until August 31, 2017. This is a unique show of paintings of a local traveling group of artists who went to Monhegan Island in Maine last June. These four artists are Bill Cloutman, Frank Costantino, Jack Haran and Jack Hobbs. Monhegan is a small rocky island, ten miles from the nearest mainland in Maine, and scarcely a square mile in area. It is accessible only by boat and there are no cars or paved roads on the Island. The year-round population hasn’t exceeded 40 in recent years. For more than 100 years, Monhegan has been a summer haven for artists and other visitors who appreciate its isolation, the beauty of its wilderness areas, its quiet relaxed atmosphere, and its unhurried pace.

On Sunday, August 20, from 3 to 5pm, Frank Costantino will replicate his painting called Uphill Dory II in watercolor and explain how & why he went about the composition, his palette choices for the colors, and the various methods of washes that comprise the work. This demo piece may also be for sale.


About the Artists:
Bill Cloutman, a Swampscott resident, studied art at Vesper George School Of Art in Boston, under Robert Douglas Hunter and Don Stone who have been the most influential of the people he has studied under for fine arts. Upon graduation he went into the U.S. Navy as a photographer on an aircraft carrier. After discharge he returned to Boston to pursue a career in commercial art as an art director and creative director. In 1991 he rekindled his friendship and scholastic relationship with Robert Hunter to study painting. With his help plein-air oils have become his focus. His works have been represented by several Massachusetts galleries, and has won numerous awards.