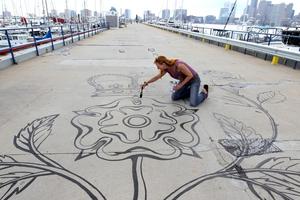 The Artisan’s Asylum Speaker Series seeks to engage our community and inspire us to make the world we want to see. All events are free for members and Friends of Artisan’s and a $10 suggested donation from the public. If you are interested in being a speaker, email events@artisansasylum.com.

Join us for an evening with Liz LaManche talking about her work in public art, fine art and kinetic light paintings. LaManche’s work is often characterized by bright color and playful figures or a layered use of symbolic & iconographic detail.

My work has been characterized as “vibrant, with a touch of whimsy…” “Saturated dreamscapes sit astride personal and evocative moments to create heightened emotional realities.” I create large-scale works that enliven the built environment, adding meaning, color and ranges of feeling…”like a view of a slightly different world.”

About Liz Lamanche
Thanks to living abroad at an impressionable age, Liz LaManche grew up with a sense that there are many different ways of being and a big, fascinating and colorful world out there. Her imaginary worlds and creatures, and perverse desire to decorate everything, started coming out early in life. She spent her early childhood in Turkey and Germany, influenced by early exposure to the people, art and architecture of Europe and Turkey, by French comic books, and by her grandfather, a Romanian amateur artist. She went to school in Connecticut and received a B.A. in Architecture at Yale University. There she studied graphic design under Inge Druckrey, and did a thesis project in architectural ornament/site specific urban installations advised by sculptor Kent Bloomer. She has spent much of her career as a designer for online media, running her own studio since 2001 (EmphasisCreative.com), and painting all the while. Since 2004 she has also been working in large-scale paintings, some lit with custom-programmed color-changing LED light. Her 40-foot permanent outdoor color-changing mural in Hyattsville, MD, completed in 2013, is the first of its kind. Learn more about her and her work at her website: http://earthsign.com/