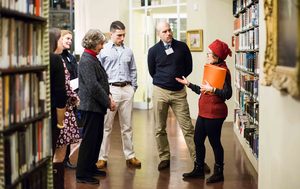 Join a Boston Athenæum docent for an hour-long tour focused on the architectural history of the Athenæum's building and on the institution's fine arts collection. The Athenæum’s current home—its fifth—opened in 1849 and has been expanded and renovated twice, once from 1913 to 1915 and again from 1999 to 2002.

The Athenæum’s collection of fine art is one of the most significant to have been formed in the United States in the first half of the nineteenth century. The tour will highlight select paintings and sculptures from the collection on view throughout the building.

Tours are limited in size and often sell out. We recommend booking a month in advance, especially for Sundays.