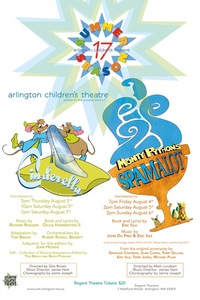 Celebrating 25 years of performances, and recently voted one of “12 Great Children’s Theaters Across the US” by Backstage Magazine, Arlington Children’s Theatre (ACT) is thrilled to announce their summer musicals, Cinderella and Spamalot. In Cinderella, ACTors ages 7-13 recreate the timeless enchantment of a magical fairy tale with the Rodgers & Hammerstein’s hallmarks of originality, charm and elegance. In Monty Python’s Spamalot, ACTors ages 13-18 retell the legend of King Arthur and his Knights of the Round Table, and features a bevy of beautiful show girls, not to mention flying cows, killer rabbits, and taunting Frenchmen. The shows feature ACTors from Arlington and seven neighboring communities including Belmont, Cambridge Medford, Lexington, Somerville, Winchester and Weymouth.

Performances of Cinderella and Spamalot will be held on Thursday, August 3rd – Saturday, August 6th. All performances take place at Arlington’s Regent Theatre, located at 7 Medford Street. Tickets are $20.00, available at the box office or online.

Cinderella was presented on television in 1957 starring Julie Andrews. Rodgers & Hammerstein's show was the most widely viewed program in the history of the medium. Its recreation in 1965 starring Lesley Ann Warren was no less successful in transporting a new generation to the miraculous kingdom of dreams-come-true, and so was a second remake in 1997, which starred Brandy as Cinderella and Whitney Houston as her Fairy Godmother. As adapted for the stage, with great warmth and more than a touch of hilarity, the hearts of children and adults alike still soar when the slipper fits.

Monty Python's Spamalot is a musical comedy adapted from the 1975 film Monty Python and the Holy Grail. Like the film, it is a highly irreverent parody of the Arthurian Legend, but it differs from the film in many ways. The original 2005 Broadway production, directed by Mike Nichols, won three Tony Awards, including the Tony Award for Best Musical of the 2004–2005 season and received 14 Tony Award nominations. During its initial run of over 1,500 performances it was seen by more than two million people.