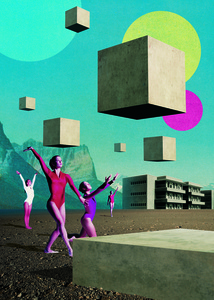 The year is 2080. iTMRW, the love story of Robert and his android partner, Jenny, unfolds against the backdrop of a world where advanced technology is both a source of and a “cure” for human alienation: advertisements come in the form of “pop-up thoughts,” entire cities float on islands of trash, female forms are purchased and discarded at will, and aristocrats live in a state of debauchery and despair. The piece takes its title from iTMRW (pronounced “I, Tomorrow”), the mega-corporation that produces and sells every single product known to humankind. Despite societal chaos, the human spirit persists in its quest for love.