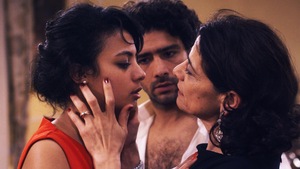 For the second year, the Boston Palestine Film Festival and MFA Film are delighted to present a survey of the very best contemporary films being produced in the Arab region of North Africa and the Middle East. This year’s lineup includes Mohamed Diab’s Clash, a masterful documentary-style drama that takes place almost entirely in the back of a police truck where protestors and journalists are help captive during a protest in 2012 Egypt. For an introduction to Arab cinema or for experienced fans, this mini-festival is not to be missed.
_____________________________________________________
CLASH
Mohamed Diab
Egypt/France
2016 | Drama | 98 min
Arabic with English subtitles

This documentary-style drama is set entirely in the back of a police truck in Egypt, where dozens of activists are held without food or water amid the 2013 protests following the ousting of president Mohamed Morsi, who had been democratically elected the year before in the wake of the protests that swept the country in 2011. Members of the Morsi-supporting Muslim Brotherhood share cramped quarters with secularist protestors, while a few journalists, children and elderly bystanders have been swept into the fray. Needless to say, tensions run high in the truck. Bitter disputes are captured with masterful camerawork, transporting the viewer to the center of the action for a harrowing but eye-opening experience.

In March 2011, radio host Obaidah Zytoon and friends join the street protests against Syrian President Bashar al-Assad. Believing that the Arab Spring will forever change their country, this group of young artists and activists begin surreptitiously, at great risk to themselves, filming their lives and the events around them on their iPhones and offering intimate commentary. But as the country spirals into a bloody civil war, their hopes for a better future are tested by violence, imprisonment, and death.

A deeply personal road movie, The War Show captures the fate of Syria through the intimate lens of a small circle of friends and graphically depicts how the mood of the conflict changed from an inspirational revolutionary one to one where the camera itself became a player for sale to the highest bidders who were intent on manipulating events for their own nefarious purposes.
_____________________________________________________
GO HOME
Jihane Chouaib
Lebanon
2016 | Drama | 98 min
French and Arabic with English subtitles

A young ballet dancer named Nada (Golshifteh Farahani, Paterson; The Lemon Tree) returns to Lebanon after years abroad to find that she feels like a foreigner in her own country. Her Arabic is rusty, making communication difficult, and she discovers that her family's palatial home has been partially destroyed by bombings. She decides to move into the dilapidated mansion and becomes obsessed with solving a family mystery: the disappearance of her grandfather, who vanished during the civil war.
_____________________________________________________
FOREIGN BODY
Raja Amari
France/Tunisia
2016 | Drama | 92 min
French and Arabic with English subtitles

A young woman named Samia (Sarra Hannachi) survives a sea crossing to enter France illegally in the aftermath of the Jasmine revolution in Tunisia. With no friends, no family, and no immigration papers, Samia must build a life for herself while avoiding the scrutiny of French authorities. She meets a sympathetic older widow named Leila (Hiam Abbass of The Lemon Tree, Munich, Paradise Now, and the upcoming Blade Runner 2049) who serendipitously offers her a job and a room in her home. Meanwhile, Samia's handsome friend, Imed (Salim Kechiouche, Blue is the Warmest Color) takes a suspicious interest in Leila. This powerful and poignant drama draws back the curtain on the faceless "refugees" who are flocking to the West and paints a moving portrait of a woman who is determined to survive at any cost.
_____________________________________________________
To order tickets by phone, call 1-800-440-6975 ($6 processing fee applies); to order in person, visit any MFA ticket desk.

Reddit
08/06/2017 17:30:00 11/06/2017 21:00:00 America/New_York Arab Film Weekend For the second year, the Boston Palestine Film Festival and MFA Film are delighted to present a survey of the very best contemporary films being produced in the Arab region of North Africa and the ... Museum of Fine Arts Boston, Boston, Massachusetts 02115 false DD/MM/YYYY