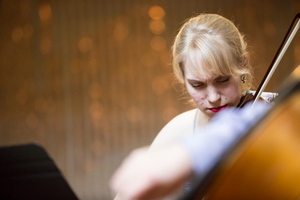 Chameleon Arts Ensemble opens its 20th anniversary season with Aaron Copland’s supreme masterpiece – Appalachian Spring – in a program on the evolution of the American Sound. Creating a language distinct from European traditions became a keen interest for Copland in the mid-1930s, and his use of the Shaker melody “Simple Gifts,” incisive rhythm, and relaxed, open textures, paved the way for a generation. Martha Graham told Copland that she wanted Appalachian Spring to be “a legend of American living, like a bone structure, the inner frame that holds together a people.” Indeed, it stands as one of the most poignant and important works of the 20th century. Also on the concert are a selection of songs by the quintessential American maverick Charles Ives; John Harbison’s North and South for soprano and chamber ensemble; Arthur Berger’s Woodwind Quartet, dedicated to Copland; and a late-Romantic tour de force – the 1908 Piano Quintet in f-sharp minor, by the pioneering Amy Beach.