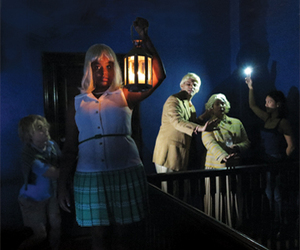 "It has everything desired of a good parody: It’s deliciously biting, wildly over-the-top and unrelentingly hilarious. Yet “Two Mile Hollow” also provides some nutritious food for thought about how people of color are portrayed in our art and media, and whose perspective we’re conditioned to accept as important." -Twin Cities Pioneer Press

When the Donnellys gather to divide their belongings after the sale of their oceanfront mansion, both an internal and literal storm brew. As this brood of famous, longing-to-be-famous, and mess of a Caucasian family comes together with their POC personal assistant, Charlotte, some really really really really really complicated and totally unique secrets are revealed over white wine.

A satirical takedown coupled with moments of disorienting sincerity, TWO MILE HOLLOW explores with brutality, awe, and compassion the age old theater genre of affluent white families retreating to their big houses for a weekend of secrets and fights. Only this time, none of the white characters are played by white actors.

TWO MILE HOLLOW was produced as a simultaneous world premiere by First Floor Theater (Chicago), Mixed Blood Theatre/Theater Mu (Minneapolis), Ferocious Lotus (San Francisco) and Artists At Play (Los Angeles). It was named one of the Top 15 Plays on the 2017 Kilroys List.

Leah Nanako Winkler is a Japanese-American playwright from Kamakura, Japan and Lexington Kentucky. Her play God Said This premiered at the Humana Festival, won the Yale Drama Series Prize, and will have its NYC premiere at Primary Stages this season. Other plays: Kentucky (2015 Kilroys List, World Premiere: Ensemble Studio Theatre co-production with Page 73 and the Radio Drama Network), Two Mile Hollow (2017 Kilroys List, 2017-2018 Simultaneous World Premiere at First Floor Theater, Mixed Blood/Theater Mu, Artists At Play, and Ferocious Lotus), Linus and Murray (EST/Marathon 2017) and more. She is the 2018-2019 Jerome Fellow at the Lark, an alumna of Youngblood, a 2016-2018 Time Warner Fellow at WP Theater, a member of the Ma-Yi Lab, and a member of the Dorothy Streslin New American Writer's Group at Primary Stages. She was awarded the first-ever Mark O’Donnell Prize from The Actors Fund and Playwrights Horizons in 2017. Leah is one of the inaugural playwrights to receive a commission from Audible's emerging playwrights fund.