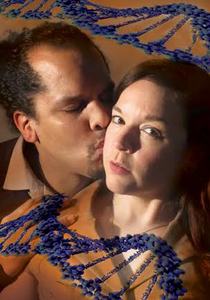 "It's the kind of work live theater needs more of – urgent, challenging and of the moment,
grappling with concepts that scare us and intrigue us."
-The Cleveland Plain Dealer

An ambitious geneticist is hired to help solve why a Native American tribe is being devastated by diabetes, but her research threatens to destroy their most sacred traditions.

With genomic breakthroughs happening at breakneck speed, Informed Consent explores the question of just how much knowledge is too much.
And who gets to decide?

Performances are at the Chelsea Theatre Works, 189 Winnisimmet St., Chelsea.
Tickets are $25 at the door, $20 in advance, $15 students

Performances will be followed by a Reception with the actors in the Gallery.

Informed Consent was inspired by the case of the Havasupai Tribe who dwell deep in the Grand Canyon versus Arizona State University. In 1989, members of the Havasupai Tribe began giving DNA samples to a scientific team from Arizona State University in the hopes of discovering why they had such an extraordinarily high rate of diabetes. But ASU used the samples not just for testing for diabetes, but for a range of other diseases as well as geographical origins, which conflicted directly with their creation story. The tribe sued for damages and for the return of their DNA samples. The case was settled out of court in 2010, but the case and the issues it raised continue to be actively studied and debated.

Deborah Zoe Laufer has had plays produced at Steppenwolf Theatre Company, Actor’s Theatre of Louisville, Portland Stage, and eighty other theaters around the country, in Germany, Russia and Canada. Informed Consent opened at the Duke on 42nd Street, a co-production of Primary Stages and Ensemble Studio Theatre, in August, 2015. An Alfred P. Sloan Foundation commission through EST, it first received productions at Cleveland Playhouse and Geva Theatre Center. End Days was awarded The ATCA Steinberg citation and appeared at Ensemble Studio Theatre through a Sloan Grant. It received a rolling world premiere through the National New Play Network, and went on to receive over 50 productions. Other plays include Leveling Up, Sirens, Out of Sterno, The Last Schwartz, and Random Acts. Deb is a recipient of the Helen Merrill Playwriting Award and the Lilly Award and grants and commissions from The Edgerton Foundation, the NEA and NNPN. Her plays have been developed at PlayPenn, The Eugene O’Neill NPC, Williamstown Theatre Festival, Ojai, The Missoula Colony, The Cherry Lane Alternative, The Dramatists Guild, New Georges, The Lark, Asolo Rep. and the Baltic Playwrights Conference. She is a graduate of The Juilliard School and a member of The Dramatists Guild.

Reddit
17/02/2017 20:00:00 12/03/2017 16:30:00 America/New_York Apollinaire Theatre Company: 'Informed Consent' "thoughtful and engrossing" -New York Times "It's the kind of work live theater needs more of – urgent, challenging and of the moment, grappling with concepts that scare us and intrigue us." ... Apollinaire Theatre Company at the Chelsea Theatre Works, Chelsea, Massachusetts 02150 false DD/MM/YYYY