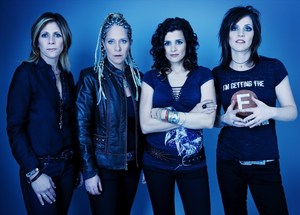 Best known for relentless touring and masterful musicianship, Antigone Rising played upwards of 280 shows a year in their early days. Whether it was an open mic on a Monday night or a jam packed New York City hometown show, the ladies and their infamous Vanna White (the band’s beloved 15 passenger van) eventually blazed a trail straight to arenas alongside The Rolling Stones and Aerosmith.

Founding sisters Cathy and Kristen Henderson have always had the same philosophy. Play better than the boys and make sure the fans feel like part of the family. That philosophy plus writing undeniably catchy songs has allowed this self sustained group to maintain her independence and leave an indelible mark on an industry best known for leaving girl (bands) behind.

Girls Rising (501c3) main objective is to inspire girls to pursue nontraditional career paths. Through outreach workshops the band performs at schools and community centers around the world, Antigone Rising is inspiring the next generation of kids to be game changers! To learn more about the band’s nonprofit, or to make a donation, visit Girls Rising.org online!