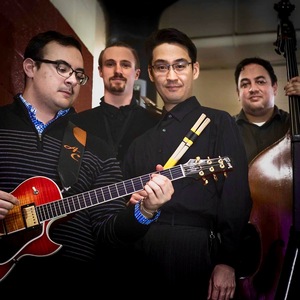 Come to celebrate the arrival of the New Year at a world-class whiskey bar, Saloon. Dance to the sweet sounds of Anthony Crescente Quartet, be entertained by the cast of Smoke and Shadows and enjoy a complimentary champagne toast at midnight. Get your tickets while they are available.

Anthony Crescente is a jazz guitarist, composer, and educator from the Boston area. Graduating from UMass Boston in 2015, and continuing his graduate musical education at Boston University, blues and jazz have always been at the forefront of his playing and teaching. His style incorporates language from bebop, blues, and jazz while being heavily influenced by such greats as Pat Martino, Wes Montgomery, and Grant Green. Anthony is an endorser of Carlino Guitar straps, and soon be a Carlino Guitar Endorsee as well

Tatsuya “Tat” Yoshinaga is an award-winning, multi-instrumentalist currently residing in the U.S. Tat who is originally from Japan, came to Boston to attend the prestigious Berklee College of Music. After much success as a performer and teacher, he now calls Boston his home. Tat plays and teaches piano, keys, guitar, ukulele, bass, drums, and percussion. As a member of the American Federation of Musicians/Boston Musicians' Association, he enjoys collaborating with the world-class musicians in this organization, has been recognized as a spectacular drummer, and is a recipient of the prestigious Zildjian Award, in addition to several music scholarships.

Alex Peabody, from Connecticut, has been playing saxophone in the Boston area for the past eight years. Graduating from UMASS Boston in 2014, and attending Berklee College of Music. Shortly after, he continues his education in music by playing with different bands of varying styles and genres, all over the greater Boston area.

Chicago-born bassist Shourin Sen is a performer dedicated to the history and progress of jazz. He holds a bachelor's degree in music performance from Northwestern University and a master's degree in jazz studies from New England Conservatory. Sen has studied with some of jazz music's brightest luminaries including Danilo Perez, Steve Lacy, Cecil McBee, and Jerry Bergonzi. As a bassist, Sen performs frequently and has shared the stage with such musicians as Sachal Vasandani, Marco Paguia, Michael Kocour, Peter Kenagy, and Eric Rasmussen.