Ansel Adams in Our Time 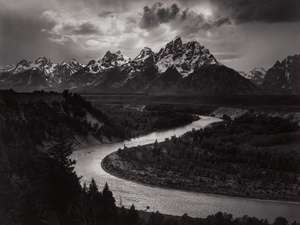 “Ansel Adams in Our Time” traces the iconic visual legacy of Ansel Adams (1902–1984), presenting some of his most celebrated prints, from a symphonic view of snow-dusted peaks in The Tetons and Snake River, Grand Teton National Park, Wyoming (1942) to an aerial shot of a knotted roadway in Freeway Interchange, Los Angeles (1967). The exhibition looks both backward and forward in time: his black-and-white photographs are displayed alongside prints by several of the 19th-century government survey photographers who greatly influenced Adams, as well as work by contemporary artists whose modern-day concerns centered on the environment, land rights, and the use and misuse of natural resources point directly to Adams’ legacy.

While crafting his own modernist vision, Adams was inspired by precursors in government survey and expedition photography such as Carleton Watkins (1829–1916), Eadweard Muybridge (1830–1904), Timothy O’Sullivan (1840-1882) and Frank Jay Haynes (1853–1921), who worked with large bulky cameras and glass-plate negatives and set off into the wilderness carrying their equipment on mules. In some cases, Adams replicated their exact views of the Yosemite Valley, Canyon de Chelly, and Yellowstone, producing images that would become emblematic of the country’s national parks. In Clearing Winter Storm, Yosemite National Park (about 1937), the granite crags of the Yosemite Valley are wreathed in clouds after a sudden storm. Executed with unrivaled sensitivity and rigorous exactitude, the artist’s photographs popularized the notion that the American West was a pristine, and largely uninhabited, wilderness.

“Ansel Adams in Our Time” also brings Adams forward in time, juxtaposing his work with that of contemporary artists such as Mark Klett (born 1962), Trevor Paglen (born 1974), Catherine Opie (born 1961), Abelardo Morell (born 1948), Victoria Sambunaris (born 1964), and Binh Danh (born 1977). The more than 20 present-day photographers in the exhibition have not only been drawn to some of the same locations, but also engaged with many of the themes central to Adams’ legacy: desert and wilderness spaces, Native Americans and the Southwest, and broader issues affecting the environment: logging, mining, drought and fire, booms and busts, development, and urban sprawl.

Adams’ stunning images were last on view at the MFA in a major exhibition in 2005; this new, even larger presentation places his work in the context of the 21st century, with all that implies about the role photography has played—and continues to play—in our changing perceptions of the land. The Adams photographs in the exhibition are drawn from the Lane Collection, one of the largest and most significant gifts in MFA history.