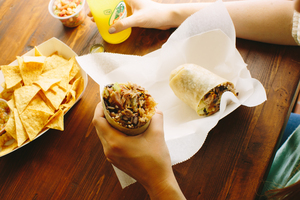 The team behind Anna’s Taqueria, Boston’s beloved Mexican restaurant with seven locations throughout Greater Boston, will bring back their popular Charity Rolling events beginning on Wednesday, August 18th. Since the first occurrence in 2013, Charity Rolling events have raised funds for nonprofits including Christmas in the City, Lovin’ Spoonfuls, Dana-Farber Cancer Institute, MassEquality, the Women’s Lunch Place, the Boston Ballet Foundation, Casa Myrna, and many more.

One of the charities closest to Anna’s Taqueria’s heart, Casa Myrna, will kick-off the revival of Anna’s rolling events this summer. Casa Myrna’s Boston Marathon team will be onsite testing their hands at burrito rolling to support the charity’s mission to spread awareness of domestic violence and to provide shelter and supportive services to survivors.

Anna’s Taqueria has been proud to support local charities since opening their first location in 1995. With their Charity Rolling program, Anna’s enlists loyal fans and customers to make burritos behind the line and raise money for the cause of their choice. During each two-hour event, customers are encouraged to spend $10 on a burrito made by the guest roller, plus chips and salsa, with all proceeds from the event going directly to the night’s featured charity. Those raising funds for the Boston Marathon or any other local non-profit are welcomed to sign up to host a charity rolling event at: annastaqueria.com/about-annas/charityroll/

Anna’s Taqueria will kick off the year of Charity Rolling events with their fundraiser for Casa Myrna on Wednesday, August 18th, 2021, from 6:00pm to 8:00pm.