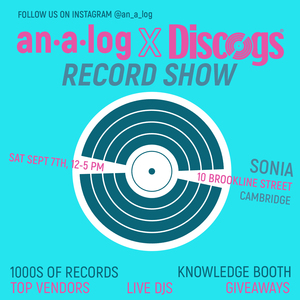 Bringing Vinyl to the People: ANALOG with support from Discogs to host record show with workshops and vinyl sets from local DJ’s.
ANALOG with significant support from Discogs is hosting its first record show Saturday, Sept 7th 12-5 at Sonia, 10 Brookline St, Cambridge, MA 02139. As Boston’s first vinyl- only event this year Analog is excited for the line-up which includes workshops on scratching, spinning and sampling from 12-1, DJ performances from 1-5 by local legends, and many local vendors bringing their best crates. On-site will be a knowledge booth for folks who have questions about setup, records, or whether their partner loves them.

Co-founder Josh Boon on ANALOG: "Helping start ANALOG for me was a "If you build it, will they come?" kind of moment and happy to say they have! At our weekly open- decks we've had folks spin on two decks for the very first time to folks who've been collecting for years mentor folks new to the scene. We've heard everything from pyschedelic rock to lo-fi (and everything in between) and it has been terrific."

ANALOG was started by Rob Singh and Josh Boon as way to help generate interest in vinyl and place for folks who enjoy vinyl to swap stories and practice their craft. We host weekly open-decks at saus in Union Square, Somerville where folks can practice spinning and swap stories and a monthly record store hunt where we dig up new tunes for the next month. Open to all and always down for new tunes.