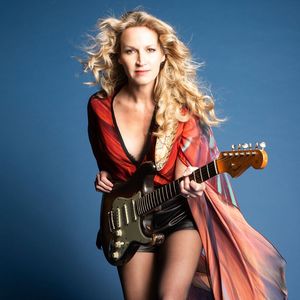 This year sees Ana Popovic celebrating 20 years as a touring musician, hitting cities all across the US and Europe.

Called “one helluva a guitar-player” by Bruce Springsteen and nominated for six Blues Music Awards, Ana has appeared on the covers of Vintage Guitar and Guitar Player magazine. Her albums 'Can You Stand The Heat' and 'Unconditional' were USA Today Picks-Of-The-Week and featured on NPR Weekend Edition, who praised her "Fiery technique on the Stratocaster". Nearly all of Ana's albums reached the top of the Billboard Blues Charts. She and her six-piece band have toured tirelessly, sharing stages with B.B. King, Buddy Guy, Jeff Beck, Joe Bonamassa and many others.

The 20th Anniversary tour kick-offs on February 19 in Atlanta, GA. During the trek, Ana and her band make stops in and around cities including New York, Chicago, Minneapolis, Denver, Salt Lake, and Portland. In Europe, Ana will perform in Paris, Barcelona, Milan, Amsterdam, Munich, and Cologne.