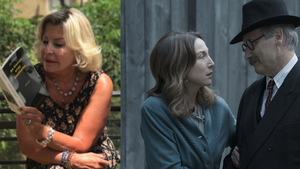 SYNOPSIS:
Janot Reichenbach (Elsa Zylberstein) fell in love with Léon Blum as a teenager but life circumstances kept them from marrying. When, at last, they can be together it’s 1940 and the French government has fallen to Germany. Blum, the French-Jewish socialist three-time Prime Minister, is pursued by the Nazis and Janot, determined to stay close to Blum, refuses to follow family as they flee the country. This touching historical drama follows Janot in her decision to abandon her comfortable life and risk everything to be by Blum’s side.

Thursday, November 12 at 2:00 pm. Included with purchase of a ticket to the film or with a pass.