An Evening with Bill Janovitz & Friends 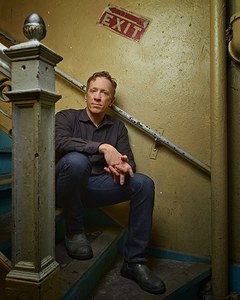 Join us as Bill Janovitz returns this Fall to The Burrren Backroom with special guests! This past spring Bill was joined by Tanya Donelly, Dean Fisher, Brian and David Charles, Chris Colbourn, Hilken Mancini, Danielle Miraglia, Phil Aiken, of course the Janovitz brothers and the most special guest of all Lucy Janovitz! You never know who will show up! Each Bill Janovitz & Friends show is one not to be missed!

Janovitz can play and has played across the city on his own and with Buffalo Tom. After a successful solo show last January, he decided on a repeat appearance in the Backroom this month.

“I used to live down the street and always thought that back room would make a perfect rock and roll venue, sort of like Maxwell’s was in Hoboken, with a front pub and back room venue,” Janovitz said. “Its potential as a real listening room or rock club was not tapped until Tom pulled it together. It is a great place for older music fans like me and mine."

Ken Sears wrote on If It's Too Loud:

One of the best things about living in the Boston area are shows like last Saturday night's Bill Janovitz performance at The Burren. The Buffalo Tom frontman played a laid back solo set at a 100 person dinner venue in the back room of an Irish pub. Such a small venue and Janovitz's easy rapport with the audience made this an incredibly intimate show, particularly with the special guests for the evening.

Bill Janovitz is a founding member of the beloved Boston-based band, Buffalo Tom, who continue to tour worldwide and released their ninth album in March 2018. He also has four solo records, as well as recordings with side bands, including the most recent, the Needy Sons.