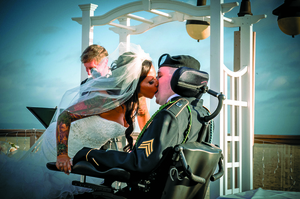 In English with Open Captions
At age 21, Sgt. Nick Mendes was blown up by an I.E.D. in Afghanistan, paralyzing him from the neck down. This unflinching and surprisingly funny documentary follows him for five years as he re-adjusts to life. At the start of the story he is in a V.A. hospital unable to speak, eat, or even breathe on his own. By the end of the film he is studying for a real estate license, using
mouth-operated technology to play video games, and fishing. Nick reunites with the soldier who saved his life in Afghanistan and most amazing of all, is he falls in love with and marries his medical caregiver.