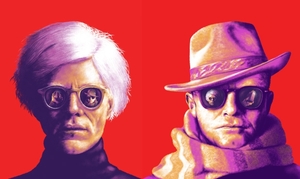 In the late 1970s, Truman Capote and Andy Warhol decided that they were destined to create a Broadway play together. Over the course of the next several months, they would sit down to record a series of intimate, wide-ranging conversations. The play never came to be, and the hours and hours of tape were lost to the ages. Until now.

With the support of the Andy Warhol Foundation for the Visual Arts and the Truman Capote Literary Trust, award-winning director Rob Roth adapted WARHOLCAPOTE from never-before-heard conversations between these two icons of American art and literature. This world premiere production is staged by Tony Award-winning director Michael Mayer (Spring Awakening, Hedwig and the Angry Inch).