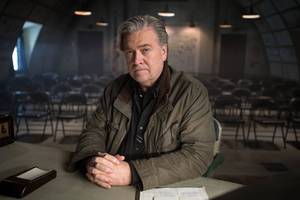 The Harvard Film Archive is happy to welcome back documentary legend Errol Morris with a screening of his provocative new film, American Dharma, followed by a conversation with Ann Marie Lipinski, Curator of the Nieman Foundation for Journalism at Harvard.

"Years ago I wanted to start an ostrich anti-defamation league because I thought ostriches were being unfairly criticized for a perfectly reasonable strategy—sticking their heads in a hole in the ground in order to avoid danger. Now I think there’s a lot to be said for the opposite point of view. That facing danger, square on, is usually the best course of action. Our country was plunged into chaos, or worse, in 2016. And Stephen K. Bannon was at the center of it. I feel that it is important to talk to him, to investigate him, and to understand his point of view.

Steve Bannon asked me why I wanted to make American Dharma. I told him I didn’t understand him or why he was doing what he was doing. But I thought if making a film could help me, and others, understand any of this, then it would be a good thing.

Does shedding light on Bannon give him more attention? Maybe. But I worry more about indifference, silence, avoidance, a lack of thoughtful analysis. The movie both contextualizes his remarks and pushes back against many of them. But my task as a filmmaker is neither to sanitize Bannon nor to attack him, but to try and capture his ideas and represent what he’s trying to achieve—even if that scares me." - Errol Morris

$12 - Special Event Tickets. Tickets for are available 45 minutes before showtime at the cinematheque on the lower level of the Carpenter Center. Cash or check only. No late seating.