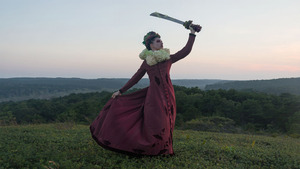 Amanda Palmer has announced the eagerly-awaited release of her first solo album in more than six years. THERE WILL BE NO INTERMISSION is now available in multiple formats on AMANDAPALMER.NET. Alongside the album, Palmer is independently releasing an artbook of narrative photography to accompany the album’s release. The hardback version is exclusively presold to Amanda’s Patrons. For more information on Amanda’s Patreon and the book visit: AMANDAPALMER.NET

Palmer’s third solo LP, THERE WILL BE NO INTERMISSION is the multi-faceted artist’s most powerful and personal collection to date, with songs that tackle the big questions: life, death, grief and how we make sense with it all. While the themes may be dark, the album’s overall sonic and lyrical mood is one of triumph in the face of life’s most ineffably shitty circumstances.

Recorded over a single month in Los Angeles by GRAMMY® Award-winner John Congleton (who previously engineered and produced 2012’s acclaimed THEATRE IS EVIL), THERE WILL BE NO INTERMISSION was entirely crowd-funded, this time by 12,000 patrons using Palmer’s community hub at patreon.com.

Palmer’s often-overlooked skills as a pianist mark the LP with a stark but grand sonic approach utterly distinct from her two prior solo albums. Indeed, the album’s 10 songs feature only a few extra overdubs provided by key associates, including Congleton, Montreal-based programmer/keyboardist Max Henry and veteran drummer Joey Waronker. Longtime collaborator Jherek Bischoff also added touches of prepared piano and upright bass; he also arranged 10 short orchestral instrumentals based on the motifs of the songs, creating an intermission of sorts between each track.

Beginning with the epic Bill-Hicks-inspired “The Ride”, THERE WILL BE NO INTERMISSION sees Palmer revealing her heart in total, turning the coals of fraught experience into musical diamonds. Palmer wrote “The Ride” with the help of her patrons, puzzle-piecing their personal comments about fear and grief into a sonic emotional snapshot of her community. Themes of death and reproduction recur throughout, including “A Mother’s Confession,” a funny, honest, slice-of-life ramble detailing Palmer’s failings as a new mother, and “Machete”, written in tribute to her best friend, Anthony (for whom her son was named), following his untimely passing from cancer. “Voicemail for Jill” chronicles a different sort of death as Palmer reaches out to a friend on her way to an abortion clinic.