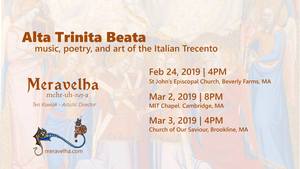 The arts and music of the Trecento exhibit a cultural crossroads between the ideals of the Middle Ages and those of the Renaissance. Musically considered the end of the medieval era, music of the trecento retains medieval tuning and style while the subject matter, written in the vernacular, tended more towards the secular. Our program features music from the Rossi and Squarcialupi Codeces, and by composers Jacopo da Bologna, Francesco Landini, and Lorenzo da Firenze, among others, performed on winds, percussion, harp, hurdy-gurdy, and voices.