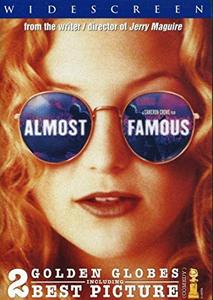 Synopsis:
Set in 1973, it chronicles the funny and often poignant coming of age of 15-year-old William, an unabashed music fan who is inspired by the seminal bands of the time. When his love of music lands him an assignment from Rolling Stone magazine to interview the up-and-coming band Stillwater -- fronted by lead guitar Russell Hammond and lead singer Jeff Bebe William embarks on an eye-opening journey with the band's tour, despite the objections of his protective mother.

Notes from our film programmer, Jennifer Sullivan:
“The only true currency in this bankrupt world is what you share with someone else when you’re uncool” - Phillip Seymour Hoffman as Lester Bangs

Written and directed by Cameron Crowe, Almost Famous is beautiful film about finding your place within a subculture and in the world at large, and most importantly the soundtrack that accompanies that journey. The scene where Anita (Zooey Deschanel) leaves Will (Patrick Fugit) a treasure trove of now classic LPs is one of several iconic scenes in the film.

The fictional band Stillwater is an amalgamation of legendary 70’s rock bands like Led Zeppelin, The Allman Brothers Band, and The Eagles. Kate Hudson is unforgettable as Penny Lane, their most devoted fan. With a massive music budget, and original songs written by Peter Frampton and Nancy Wilson, Almost Famous is a true love letter to music. Almost Famous reminds me that at one time, these classic rock staples were brand new songs, and how incredible it must’ve been to hear those songs with fresh ears.