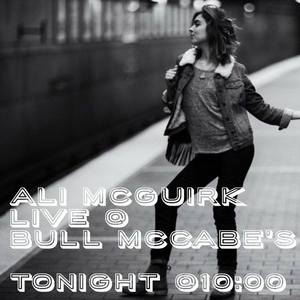 Ali McGuirk has made a career of captivating audiences with her unique blend of hypnotic R&B grooves, folk songwriter lyricism, classic soul delivery, and a gravelly blues temperament. With a focus on lively improvisation, a taste for heavy grooves, and her own buttery voice, her earliest years as a performer were spent earning residencies across 4 continents, from Santorini to Hong Kong.

Ali has recently settled in Boston, where she has been steadily gaining recognition as one of the city's most compelling vocal performers. In 2016, she was recognized in the Boston Globe as an "artist to hear" by the influential Boston rock critic Steve Morse. Shortly thereafter, she released her debut EP, and launched a highly successful GoFundMe campaign. The 4-track sampler is heavily influenced by the jazz tradition and freely moves through soul, blues, pop, reggae, and R&B feels.

In November 2017, she released her first full-length album, "Slow Burn," which saw her working with an eclectic mix of artists, including Boston guitar legend Jeffrey Lockhart, former music director for Bryan McKnight, as well as frequent collaborators and bandmates Brandon Mayes, former drummer for Kendrick Lamar, DeShawn Alexander, keyboardist for Marcus King and Eric Krasno and bass player and back up vocalist for Air Traffic Controller, Cilla Bonnie.

"Slow Burn" was named as one of Steve Morse's Top Ten Albums of 2017, garnishing a full page spread in the Boston Herald and the attention that contributed to Ali's 2017 Boston Music Award Nomination for Best New Artist.