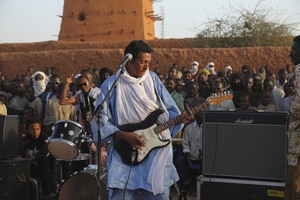 Agadez was filmed in tandem with the recording of Bombino’s first album of the same name beginning in 2010 in Agadez, Niger. The film started as a documentary about the Tuareg nomads of the Sahara Desert who for centuries connected North and West Africa with their camel caravans. After filming with Bombino (also a Tuareg) for a month, the film largely became about him, his culture, and his music. His music became an inspiration to a new generation of Tuareg adapting to a modern world. The album and the film launched him onto the world stage and follows his meteoric rise from the magnificent desert region where he comes from to recording studios and concerts in Africa, Europe, and the US. For the Tuareg, the desert is freedom. Music is power.

A live conversation with the filmmaker, Ron Wyman, will follow the screening.

This livestream is free so that people hit hardest by Covid-19 can participate. Ron Wyman has generously allowed Global Arts Live to screen his incredible film. Please thank him for his important work by donating to one of his favorite organizations--Global Arts Live! Keep Global Arts (a)Live, and we'll be bringing artists like Bombino back to Boston as soon as it's safe to do so!