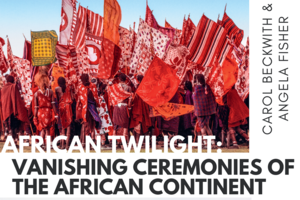 For the last forty years American born Carol Beckwith and Australian Angela Fisher have journeyed over 300,000 miles travelling through 44 countries and recording over 150 cultures on the African continent. Their recently published double volume book, African Twilight, the subject of this lecture, is the magnum opus of these two pioneering documentary photographers of African tribal cultures and ceremonies.

Their lecture will feature highlights from African Twilight, a fifteen-year study and visual homage to the vanishing traditions of the continent. Fisher and Beckwith seek out remote communities to record sacred ceremonies, celebrating Africa’s powerful art forms and boundless creativity. Their presentation will range from Maasai warrior initiations in Tanzania to the courtship rituals of the Ariaal of Kenya, from the masquerades of the spirit world in Burkina Faso to the royal rituals of the Kuba Kingdom in DR Congo.

African Twilight is a unique record of the traditional cultures of the continent. Forty percent of what Beckwith and Fisher have recorded over the last four decades no longer exists.