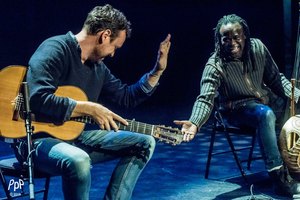 Derek Gripper, South Africa's leading classical guitarist, will share secrets of African music, which he carefully transcribed for the guitar and works equally well for the ukulele. After his evening concert of March 9th in Cambridge, he will give this exclusive workshop after the Boston Guitar Orchestra rehearsal in Historic Lower Mills. Due to limited seating capacity, interested participants are requested to register early.

"What Derek Gripper is doing with educational and other projects is inspiring...I think it is where the guitar should be going” — John Williams, in Classical Guitar Magazine UK

“One of the very small percentage of musicians who have risen to the top of their field” — Jeremy Geffen, Senior Director of Carnegie Hall

It took Derek Gripper untold hours of painstaking work to transcribe note-for-note the complex compositions of Malian kora player Toumani Diabaté and find a way of playing them on classical six-string guitar. The results appeared on his ninth album, One Night on Earth, marking a meeting point of the written tradition of Western classical music and the oral tradition of the West African griots.

Derek’s teaching style is informed by years of classical guitar study as well as studies and research in Montessori education, Alexander technique and experimentation with the interaction between thinking and doing. He has taught four year olds and eighty year olds, virtuosos and ukulele owners.

This is an event organised by the Boston Guitar Orchestra.