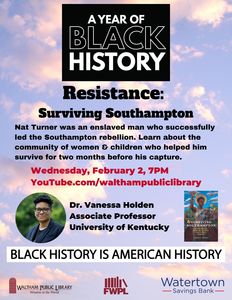 Most people have heard the name Nat Turner before. His actions as an enslaved man who successfully led a rebellion in antebellum Virginia that lead to the death of nearly sixty white men, women and children, made him impossible to ignore in his own time. Today, images of him conspiring with other enslaved men are common in textbooks. Less well known by most is that Turner managed to evade capture in Southampton County for more than two months after the rebellion ended. How did he survive? Who fed him? Who kept him hidden?

Dr. Vanessa M. Holden's research begins with this very simple question: How did Nat Turner survive very near where he was enslaved at a time when he was the most wanted enslaved man in America? The answer is his community that included Black women and children. In this lecture, Dr. Holden will talk about her new book, Surviving Southampton: African American Women and Resistance in Nat Turner's Community. She'll speak about Black women's roles in building and sustaining long-standing forms of resistance, their participation in the Southampton Rebellion, and their role in helping their community to survive in the rebellion's aftermath.