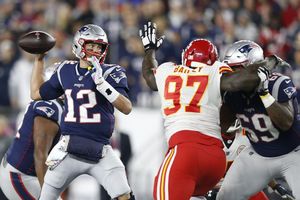 Where:
Your couch (or a bar) in Boston +
Surrounding areas
Boston, MA

The New England Patriots advanced to an NFL-record eighth consecutive AFC Championship Game. The Patriots are also now the only team in NFL history to advance in the playoffs for eight straight seasons (2011-18).