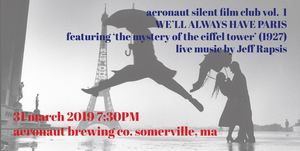 We've worked with fantastic accompanist Jeff Rapsis many times, and anyone who has caught him live will recall what a unique and magical experience he provides, and how special it is to watch these groundbreaking and influential films, most of which are rarely screened today. For the inaugural launch, we'll time travel back to Paris ca. 1927 – an era of thrilling style and joie de vivre. Accompanied, of course, by the delicious creative concoctions of our brewing team!

We want this to feel like a real community of silent film fans and to that end we're launching (lol) a more structured flavor to these screenings. You can expect them to happen 4x per calendar year, with a large-scale theme and/or anniversary dictating each event. We encourage folks to embrace the theme and dress appropriately, bring themed picnics and food, etc. – have as much fun with these themes as you'd like!

Our first event celebrates a très significant anniversaire occurring on March 31, 2019 – the 130th birthday of the completion of the iconic Eiffel Tower! To that end, we're inviting Jeff in to play live music along with the vintage silent thriller The Mystery of the Eiffel Tower, directed by Julien Duvivier. Released in 1927, this is a rare silent adventure movie with a thrilling climax actually filmed on the tower!

Admission is a mere $10 per person and seating is limited.

SYNOPSIS
Duvivier’s late-silent adventure served as an inspiration for the original Tintin comics, and delivers much of the same charm, inventiveness, and visual delight. Set in France of the 1920s, 'The Mystery of the Eiffel Tower' follows a carnival performer who is half of The Mironton Brothers, a supposed Siamese twin act. The performer sees a chance to claim a massive inheritance by pretending to be a missing heir. The scheme makes him fabulously wealthy. He leaves the circus, but also crosses a secretive cabal which has its own plans for the fortune. Harried by mysterious threats, the imposter uses his identical partner from the old carnival act to suffer in his place. Lots of laughs and exciting close calls follow as the unsuspecting double is drawn into a struggle with the secret organization. The climax is a death-defying chase up through the skeleton of the Eiffel Tower that anticipates the later work of director Alfred Hitchcock.

"This is an astounding film with sequences shot high up on the Eiffel Tower and without trick photography. This vintage film, like a fine champagne, is a great way to celebrate the 130th birthday of this landmark, one of the world's most recognizable structures!"

For more info on our featured performer, visit www.jeffrapsis.com.