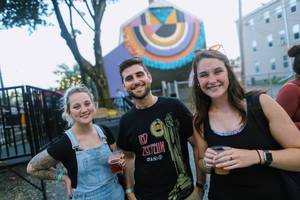 AERONAUT Allston runs through September... and now on THURSDAYS!!!

We've been packing crowds into the awesome new outdoor community program and performance space at Zone 3's hub of activity, 267 Western Ave in Allston. It's an upgrade from the blacktop parking lot of the past two years – but it still feels like home!

These events are family-friendly, however, please note that under 21s are allowed in only with a parent or legal guardian.

Read below for details on this evening's featured acts and other details. Bring your friends, neighbors, kids, and your dog, and we'll see you under the string lights!

We're sure to have a packed crowd so get there EARLY for the best seats on the lawn.

Tarciso Alves Forró Roots Band (7:30pm)
Tarciso Alves is a singer/songwriter specializing in North-Eastern Brazilian folk music. He grew up in the Brazilian state of Pernambuco, steeped in the region's traditions of music, folk dancing, and spoken-word poetry. After receiving his first guitar at the age of fifteen, Tarciso taught himself to play by jamming with local musicians, and studying the work of some of his favorite artists, such as Luiz Gonzaga, Joao Gilberto, and Gilberto Gil. By 2010, Tarciso had moved to Recife, and was playing and singing professionally with Forro bands all over the city. Soon after, he studied vocal performance at the Pernambuco Conservatory of Music, and finally, in 2014 released his first cd, “Vivencias,” which translates as “experiences” - a subtle and expressive mix of covers and originals, ranging in style from original folk ballads, to covers of American pop songs with Brazilian rhythms. His second cd, “Arrocha o No” was released in 2016, and features a mix of lively original Forro music, and more contemplative Baiao and other styles, with lyrics in both Portuguese and English. Since moving to the states, Tarciso has performed at the Cambridge Riverfest and the Make-music Harvard Square Festival, and is scheduled to perform at Boston’s Greenfest later this summer.