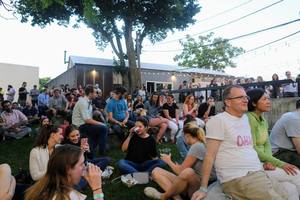 AERONAUT Allston is back!!!

We've been packing crowds into the awesome new outdoor community program and performance space at Zone 3's hub of activity, 267 Western Ave in Allston. It's an upgrade from the blacktop parking lot of the past two years – but it still feels like home!

These events are family-friendly, however, please note that under 21s are allowed in only with a parent or legal guardian.

Read below for details on this evening's featured acts and other details. Bring your friends, neighbors, kids, and your dog, and we'll see you under the string lights!

We're sure to have a packed crowd so get there EARLY for the best seats on the lawn.

Cahill (6pm)
Cahill is a songwriting duo from Boston, Massachusetts consisting of members Scott O’Brien and Robert Antonelli. The group’s earliest songwriting and studio collaborations began with a collection of demos recorded in 2003, and they have since gone on to release a total of six studio albums and a live compilation in a span of fifteen years. Cahill’s latest studio effort “Lost, Renewed” was written, produced, engineered, and recorded entirely on their own in the band’s private home studio. The album showcases their most mature studio recordings to date, blending various tones and instrumentation from several different genres including rock, alternative, pop, country, and americana.

Billy Wylder (7:30pm)
From the front-lines at Standing Rock to the archaic streets of Jerusalem, the Sahel Desert to Carnegie Hall, music has been the source of strength for Billy Wylder. The band features Avi Salloway (Bombino/Hey Mama/Avi & Celia) joined by an inspired cast of singular artists who have performed across five continents including concerts at the Coachella Music & Arts Festival, Newport Folk Festival, New Orleans Jazz & Heritage Festival, Montreal Jazz Fest, Carnegie Hall, and Lincoln Center. From 2013-16, Salloway toured the globe with Bombino, the Tuareg guitar hero from Niger, Africa. While on the journey and since returning, Salloway wrote a collection of new material that will be released on the band’s forthcoming album, Strike the Match (Sand & Gold Records) on September 7, 2018.

Salloway has been bringing these songs to life with the Wylder Family, a group of dear friends and musical kindred spirits. In between shows, the band spent ten days recording at Eyeland Studio in the Columbus Theatre, home of The Low Anthem. The music weaves together American folk and rock with sensibilities from the Sahara Desert: think Andrew Bird meets Ali Farka Toure, Pete Seeger and Talking Heads. Strike the Match expands on American musical traditions, building a bridge to their African roots and coloring the songs with experimental art-rock textures: gilded string lines, synthesizers, and angular guitars. Mother Earth is at its center, surrounded by stories of love, conflict, change and dreams.

Billy Wylder hit the road this summer and fall to celebrate the release of Strike the Match. The band has been building their family of fans and friends from the ground up. In 2011, Salloway founded the Moonshine Music Series, a surreal concert and community experience that takes place on family run farms in Massachusetts and Vermont. The Moonshine is a unique gathering and lively opportunity for Wylder fans to come together, break bread, make art, dance and connect with the land and sustainable local food sources. Billy Wylder host the Moonshine Music Festival at Earth Sky Time Farm in Manchester, VT on Sept. 2 and the Harvest Moonshine Music Festival in Wrentham, MA on Sept. 22.

Community is built on conversations with our neighbors. Join us at Dear Neighbor - a table for storytelling at Zone 3 where participants can have intimate and unplanned interactions with strangers. (Look for the picnic table with the checkered tablecloth!)