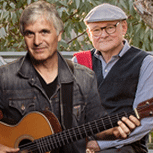 Where:
http://www.natickarts.org/performance/adrian-legg-and-laurence-juber-2019-11-02 The Center for Arts in Natick
14 Summer Street
Natick, Massachusetts 01760

Fasten your seatbelts, this is a night for the true guitar fans ! This will be an unforgettable evening of jaw-dropping fretboard magic and delightful British banter.

Globally acclaimed by critics and fans alike for his unique acoustic and electric fingerstyle guitar playing, Adrian Legg masterfully blends diverse musical styles, influences and inspirations to create a distinctive sound all his own. With multiple awards and accolades spanning four decades, Legg has been heralded as a “guitarist of astonishing virtuosity, (whose) imagination and melodic invention seem unbounded,” (Q magazine); “ridiculously talented,” (Music Week) and “simply the best acoustic guitar player I’ve ever heard.”(guitar icon Joe Satriani). Setting the stage for his international success in the decades to follow, Legg was named as Acoustic Guitarist of the Decade by the UK’s Guitarist Magazine (1984-94), and Best Acoustic Fingerstylist in Guitar Player Magazine’s Readers’ Poll for four years in a row. (1993-96).

GRAMMY® winning guitarist Laurence Juber is a solo performer, recording artist, composer and arranger. His playing fuses folk, jazz, blues, pop and classical styles, creating a multi-faceted performance that belies the use of only one instrument. First internationally recognized as lead guitarist in Beatle Paul McCartney’s Wings, with whom he won a Grammy, Juber has since established himself as world-renowned guitar virtuoso and entertainer. Juber, known to his fans as LJ, has released 27 solo albums. The latest Downtown, is a collection of standards recorded in one five hour session at Hollywood’s Capitol Studios. Juber has 4 guitar folios in print. The latest, The Evolution of Fingerstyle Guitar was published by Hal Leonard in January 2019.

02/11/2019 20:00:00 02/11/2019 23:00:00 15 Adrian Legg and Laurence Juber Fasten your seatbelts, this is a night for the true guitar fans ! This will be an unforgettable evening of jaw-dropping fretboard magic and delightful British banter. Globally acclaimed by c... The Center for Arts in Natick, Natick, Massachusetts 01760 Organizer Organizer e-mail false DD/MM/YYYY Reddit