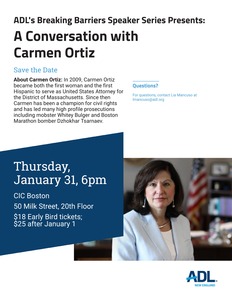 In 2009, Carmen Ortiz became both the first woman and the first Hispanic to serve as United States Attorney for the District of Massachusetts. Since then, Carmen has been a champion for civil rights and has led many high profile prosecutions including cases against the Boston Marathon bomber and mobster Whitey Bulger.

What to expect at this event?

The event will begin with a brief networking reception followed by a conversation between Carmen Ortiz and ADL New England's Regional Director, Robert Trestan. Time will be reserved at the end to take questions from the audience. Light appetizers and soft drinks will be served.

Breaking Barriers is ADL New England's speaker series. ADL invites engaging speakers to discuss topics that are relevant to ADL’s mission to "stop the defamation of the Jewish people and securing justice and fair treatment to all." Past speakers have included Judy Shepard - mother of Matthew Shepard and hate crimes activist, Willie O'Ree - the first black player in the NHL, Kathrine Switzer - the first woman to run the Boston Marathon, and Megan Phelps-Roper - former member of the Westboro Baptist Church. This winter Carmen Ortiz will share her story.