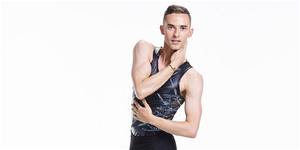 Snowport Winter Village welcomes Adam Rippon, Olympic Bronze Medalist and author of Beautiful on the Outside.

The event will take place from 10:00am – 12:00pm at Snowport Winter Village, and will kick-off with a solo figure skating performance by Adam. His performance will be followed by a Q&A with former figure skater and Olympic Bronze Medalist (2014), Ashley Wagner, a book signing of Rippon's recent memoir, Beautiful on the Outside, and a meet and greet with fans. Books will not be available for purchase at the event, but can be purchased in advance via this link.

This event is complimentary, but tickets are required via EventBrite as capacity is limited. A donation is also encouraged to The Trevor Project, a preferred charity of Rippon’s and a non-profit organization focused on suicide prevention efforts among lesbian, gay, bisexual, transgender, queer and questioning youth.

Artist. Athlete. Activist. Adam Rippon is a combination of all three.

One of the world’s most dramatic figure skaters, Adam won the hearts of America and the world following his spectacular performance at the 2018 Winter Olympics in PyeongChang, South Korea, all while making history as the first openly gay athlete to represent the United States in the Olympic Games. Rippon’s rise to fame on the global stage has provided him a platform to speak out in support of LGBTQ rights and the freedom to be oneself. His passion and charm have made him an inspiration to young and old alike, making him a role model and icon to millions.