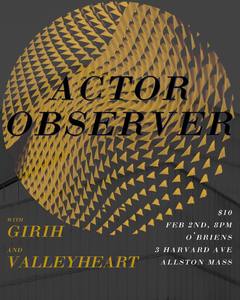 Considered by Under The Gun Review as "without a doubt one of the most promising young bands to exist in the last decade," Actor|Observer is a post-hardcore band from Boston, MA whose style is comparable to the steadfast conviction and emotional intensity of Defeater, interspersed with the melodic and tonal range of Thrice. Every live set is brimming with visceral emotion, sincerity, and a refusal to sit still. Their newest album and debut full-length, The Longer Now, produced by Jay Maas of Defeater (Counterparts, Bane, Vanna), is an enormous and defining leap forward for the band, with poignant lyrical depth interwoven throughout a barrage of melodic and tonal fierceness that was only hinted at in previous recordings. With this release and a few tours under their belts, Actor|Observer are now taking time to write their next full length. This Spring, they will re-release The Longer Now on vinyl through Heads Up Records and embark on a two week tour to the midwest, down south, and back up the east coast. Regardless of the show, the turnout, the time of day, or their physical/mental state, A|O is committed to delivering a consistent, honest performance, tearing open the crossed arms of complacency, and reminding people that this is not just some TV show; there is no fourth wall. You're a part of this too. And whether you support that attitude or not, their message is the same: "People like you are the reason why people like us exist."