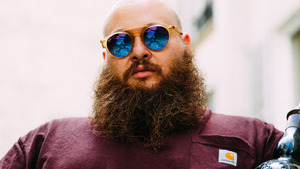 Known for detailed wordplay imbued with filth and humor, Action Bronson also calls upon his past life as a chef to spit heavy culinary knowledge. A New York City native from Queens' Flushing neighborhood, Bronson (born Ariyan Arslani) developed his first area of expertise in his family's restaurant. After studying at the Art Institute of New York City's culinary program, he filled multiple roles in the restaurant industry. Serious effort wasn't put into rapping -- which he had started on a lark -- until a broken leg precluded kitchen work. Bronson's first major showcase arrived in the form of a 2007 mixtape as a member the Outdoorsmen, which was trailed by several guest verses and a solo single. His career truly achieved flight in 2011, a year in which he released his debut mixtape, as well as his first two proper albums, Dr. Lecter and Well-Done, the latter co-billed to producer Statik Selektah.

After Bronson issued mixtapes recorded with Party Supplies and the Alchemist, the rapper made his major-label debut on Atlantic (via Vice) in 2013 with Saaab Stories, a Harry Fraud-produced EP. Given an extra boost by appearances from Prodigy and Raekwon, two of Bronson's key '90s hardcore inspirations, the EP peaked at number six on Billboard's rap chart. Another collaborative tape with Party Supplies was out by the end of that year. Bronson continued to stockpile guest verses on the way to third album Mr. Wonderful. The success of pre-release single "Baby Blue," featuring Chance the Rapper, helped take the full-length to number two on the rap chart and the Top Ten of the Billboard 200. In 2016, Bronson took his food and travel web series, Fuck, That's Delicious, to cable television, and only a few months later launched a second series for the Viceland channel, Traveling the Stars: Action Bronson and Friends Watch Ancient Aliens. The Traveling the Stars theme "Descendant of the Stars," "Durag vs. Headband," and the Suicide Squad: The Album inclusion "Standing in the Rain" also reached the public during 2016. Another album for Atlantic, Blue Chips 7000, and a book, Fuck, That's Delicious: An Annotated Guide to Eating Well, arrived in 2017. The following year, Bronson issued his fourth effort, White Bronco, which featured the title track and "Prince Charming."