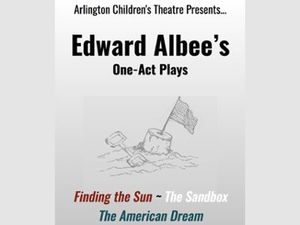 Celebrating 25 years of performances, and recently voted one of “12 Great Children’s Theaters Across the US” by Backstage Magazine, Arlington Children’s Theatre (ACT) is thrilled to announce their performances of three One-Act plays from Tony and Pulitzer Prize-winning playwright Edward Albee. Each performance will feature talented teen ACTors in a triple bill of Albee shortplays: Finding the Sun, American Dream and The Sandbox.


Albee’s works are often quirky and humorous studies of the human condition and these three short plays fall in line. Finding the Sun takes place on a sunny New England beach populated by four couples. As a matter of coincidence, six of the eight characters are connected to one another in some way. This history creates questions, intrigue and controversy on what would otherwise be another sunny day at the beach. In American Dream, Mommy and Daddy discuss putting Grandma in a nursing home but clever and witty Grandma has other ideas. Two guests show up and eventually turn everyone’s world upside down. Also featuring characters named Mommy, Daddy and Grandma, The Sandbox open with a young man doing calisthenics by a beach. The fit young man’s surprising purpose is finally revealed, but it’s up to the audience to determine why The Musician is there. These short plays are sure to entertain and make you think!