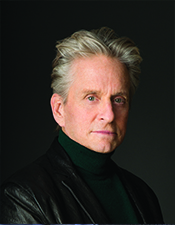 The event will feature a reception, awards ceremony, and opportunity to hear Mr. Douglas speak on his life and career.

An actor celebrating 50 years of experience in theatre, film and television, Michael Douglas branched out into independent feature film production in 1975 with the Academy Award-winning One Flew Over the Cuckoo's Nest (1975). Since then, as a producer and as an actor-producer, he has shown an uncanny knack for choosing projects that reflect changing trends and public concerns. Over the years, he has been involved in such controversial and politically influential motion pictures as One Flew Over the Cuckoo's Nest, The China Syndrome (1979) and Traffic (2000), as well as such popular films as Romancing the Stone (1984) and Fatal Attraction (1987). Mr. Douglas' papers are held at the Howard Gotlieb Archival Research Center at Boston University.