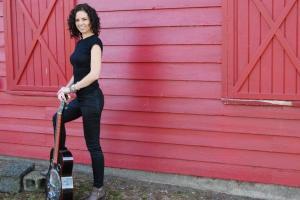 Abbie Gardner, the fiery Dobro player with an infectious smile, is playing Club Passim in Cambridge, MA on Friday, November 3rd at 8 PM. Gardner has been touring with Americana darlings Red Molly for the past eleven years. The band decided to take an indefinite hiatus in 2015, so Abbie is striking out on her own! Abbie's first full-length recording, "My Craziest Dream" (2004) is an album of jazz standards featuring her father on piano. Abbie has been recognized as an award-winning songwriter, with such accolades as 2006 Rocky Mountain Folks Festival Songwriter Showcase (2nd place), 2008 Lennon Award Winner (folk) for "The Mind of a Soldier" and 2008 American Songwriter Magazine Grand Prize Lyric Winner for "I'd Rather Be." Tickets are on-sale now at www.clubpassim.org. Ksenia Mack is opening.