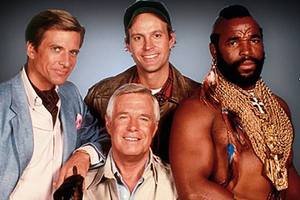 I LOVE IT WHEN A PLAN COMES TOGETHER. And our plan is to play for several hours, a mix of originals and 1980s pop. Why? Because nothing rocks a Toad party like an 80s party.

Also, there's never a cover at TOAD! Get in for free! Drink for money!

Now let's play a game called "which A-Team member did Abbie have a weird crush on when she was little."

Paul Robicheau of The Improper wrote that their album, That Shame, showcases her in full rock mode, sometimes evoking the tone and phrasing of the Pretenders’ Chrissie Hynde…[Her] craftsmanship extends from the gorgeous vocals of “As I Wanted You” and the soaring crescendos of “Falling” to the catchy ’80s-flavored punch of “Take It in Stride.”