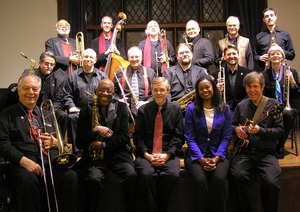 The Aardvark Jazz Orchestra, led by founder and music director Mark Harvey, will present the band’s 47th Annual Christmas Concert, with a celebration of Duke Ellington (1899-1974) in his 120th birthday year. Of special note will be a rare performance of The Magi, from Ellington’s Three Black Kings. Other Ellingtonia will include Come Sunday, Almighty God Has Those Angels, and The Shepherd. The orchestra will also perform jazz carols and spirituals featuring Aardvark vocalists Grace Hughes and Jerry Edwards.

Proceeds from the December 14 concert will benefit the Refugee Immigration Ministry, an organization of multiple faiths and cultures that provides community-based services for refugees and immigrants.

The Aardvark Jazz Orchestra gave its first concert December 23, 1973 at the Church of the Covenant in Boston as a benefit for the Chelsea Fire Fund. Every year since then, the band has held a Christmas benefit concert to support diverse organizations including Doctors Without Borders, Rosie’s Place, Pine Street Inn, Community Works, American Friends Service Committee, and many others.

Aardvark has given numerous concerts honoring Duke Ellington, including an Ellington Centennial Celebration at MIT Kresge Auditorium in 1999, a performance of the complete Ellington-Strayhorn Nutcracker Suite at Boston’s Emmanuel Church in 2013, two shows featuring Ellington’s music at the storied Silver Center in Plymouth New Hampshire, a Salute To Duke for Rockport Music at the Shalin Liu Performing Arts Center in 2017, and many presentations of the Duke Ellington Sacred Concert repertory.

Mark Harvey has performed internationally, has recorded with esteemed jazz artists, and teaches jazz history at MIT. He has transcribed many Ducal works, and has written and lectured about Ellington, with an emphasis on the sacred music, for many years. His review of Harvey Cohen's Duke Ellington in America was published in the Spring 2012 issue of American Music (University of Illinois Press). In 1989, Harvey co-produced an Ellington Sacred Concert at Boston Symphony Hall as performed by the Duke Ellington Orchestra under the direction of Mercer Ellington. Harvey was an usher at Duke Ellington's funeral in 1974. Harvey has been a jazz community activist for more than 50 years, and he is a retired Methodist minister.

Founded in 1986, Refugee Immigration Ministry (RIM) has brought volunteers together from many cultures and faiths to provide services for refugees, immigrants and detainees. RIM’s programs include spiritual care, English classes, job placement assistance, and community-based resettlement.