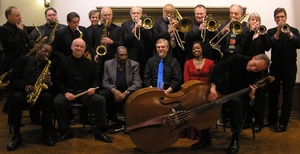 Aardvark’s exuberant holiday event will feature joyful jazz arrangements of favorite carols like Silent Night and Go Tell It on the Mountain, and music by director Mark Harvey in the spirit of the season. Highlights will include originals by Mark Harvey that received their premieres in prior Christmas concerts. The Prophet (December 1997) honors legendary social activist Kip Tiernan, and Blue Butterfly (December 2009) remembers beloved storyteller Brother Blue. Aardvark’s tradition of presenting music that joins joy and justice is summed up with No Walls, the band’s anthem inclusivity, first performed in December 2004 as a tribute to Doctors Without Borders.

Led by founder/music director Mark Harvey, The Aardvark Jazz Orchestra gave its first concert December 23, 1973 at the Church of the Covenant in Boston as a benefit for the Chelsea Fire Fund. Every year since then, the band has held a Christmas concert to support a deserving cause, as part of the band’s commitment to social justice, community outreach, and inclusiveness. Past beneficiaries have included Doctors Without Borders, American Friends Service Committee, Rosie’s Place, Pine Street Inn, and dozens more. Esteemed guests who have joined the Aardvark Christmas concerts include Sheila Jordan, Howard McGhee, Semenya McCord, Joe Carroll, Ron Gill, Jack Powers, Kip Tiernan, and Brother Blue.

Aardvark performs original compositions by Mark Harvey, as well as classics from the jazz tradition, American music, and world music, including collaborations with film, dance, choral groups and symphony orchestras. The band has premiered more than 175 works and appears on 14 CDs, including 8 discs on Leo Records.

Mark Harvey is Aardvark’s founder, music director and principal arranger. He has 200 compositions in his catalogue, has performed internationally and recorded with esteemed jazz artists, teaches jazz history and composition at MIT, and was named Boston Jazz Hero 2015 for his social activism and advocacy in the jazz community spanning more than four decades. He is a retired Methodist minister.

The Poor Peoples United Fund was founded in 1980 by Kip Tiernan and Fran Froelich to advocate for social change on behalf of the poor and the homeless and those who have no voice in society. PPUF provides financial and support services to small grassroots member organizations; emergency assistance to individuals and families in need of food, housing, and health care; and education and advocacy for enlightened and just social policies.