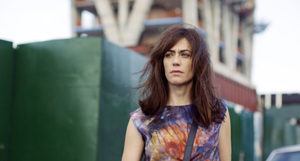 Maggie Siff (Mad Men, Sons of Anarchy) delivers an acting tour-de-force as Anna Baskin, an exhausted workaholic actress at a crossroads. She abruptly extricates herself from a successful but mind-numbing TV role, returning to a life she left behind with ex-creative partners Kate (Seymour) and Isaac (Ortiz). From artist and filmmaker Elisabeth Subrin, A WOMAN, A PART “takes on the industry with grace, insight and some big ideas” (IndieWire), with an examination of the media’s portrayal of women, the nature of friendship and the difficulties of reckoning with change.

“Expertly executed… If only more American independent cinema was this poignant and compelling.” – Artforum

“Sophisticated storytelling… This debut marks Subrin as a talent to watch.” – Screen International

“This is how you make a feminist film about Hollywood.” – IndieWire